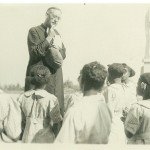 “It surely is difficult to understand why anybody could refuse a bed and shelter to a helpless, homeless child, no matters its color or creed might be.”

Father Bernard J. Quinn (1888-1940) was the founding pastor of St. Peter Claver Church, the first parish established for Black Catholics in the Diocese of Brooklyn in 1922. Ten years later, in 1932, he opened the Church of St. Benedict the Moor in Jamaica, New York. Father Quinn was also the founder of Little Flower House of Providence Orphanage in Wading River, New York, the precursor of Little Flower Children’s Services. This was an enormous undertaking at the time, in an era when racism and prejudice were facts of life. In his first pastoral letter to his parishioners’ on June 1, 1922, Father Quinn pledged to”…willingly shed to the last drop, my life’s blood for the least among you.” Such was the life giving sacrifice of this shepherd to his people. 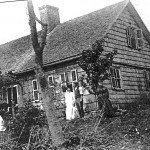 1873    C.J. Payne moved into the house — better known as the Ernest Payne House.  Payne was the grandson of C.J.  It was eventually owned by Oliver Paine.

At one of the quarterly conferences for the clergy of Brooklyn that Fr. Quinn had attended in 1916, Bishop Charles McDonnell addressed the issue of the shortage of priests in the rural home missions of the southern states and asked his priests to consider offering their services there.  Quinn was deeply moved, but he was struck by the fact that there was so little being done for blacks right at home in his own diocese.

“What greater home mission have we than that of our colored brethren right here in our own diocese?“

In December 1918, Fr. Quinn chanced upon the autobiography of Sister Therese of Lisieux, The Story of a Soul.  Thus began his devotion and dedication to The Little Flower.

The house was destroyed by fire on August 7, 1928, possibly by the Ku Klux Klan.  Fr. Quinn rebuilds!

1929    New York State Board of Charities approved the incorporation of “Little Flower House of Providence for Homeless Colored Children” which eventually became what is now known as Little Flower Children and Family Services of New York.

1930    Walter Smith, the first child, arrives August 10th. Mother Katherine Drexel agreed to staff the home and school with the sisters in her community.  The Sisters of the Blessed Sacrament arrive in Wading River to begin their work.

1937    Twenty-four Sisters of the Holy Family of Nazareth arrived in Wading River to staff the school and home for the children in place of the Sisters of the Blessed Sacrament.  At this time, there were 283 children in the home and school.  Sister Pancratius is named the first Superior.

1936    Fr. Quinn Quinn, established a camp on the grounds called Camp Claver after St. Peter Claver Parish where Quinn was appointed. It offered the children from Brooklyn the chance to experience the rural atmosphere of the woodlands and beach at Wading River.  The camp began with cabins and tents for the children and land cleared for other camp activities.  The campers could experience swimming in the LI Sound, sleeping in the woods, and playing on the activity fields.

2008     On January 13 the Roman Catholic Diocese of Brooklyn opened a “canonical inquiry” into the cause of sainthood for Msgr. Bernard J. Quinn.  The Cause of Beatification and Canonization was opened by The Most Reverend Nicholas DiMarzio, Ph.D., D.D., Bishop of Brooklyn.

On October 17, 2008 Monsignor Bernard J. Quinn was declared “Servant of God’ by the Congregation of the Causes of Saints, Vatican City.